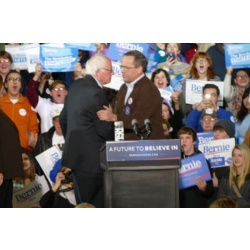 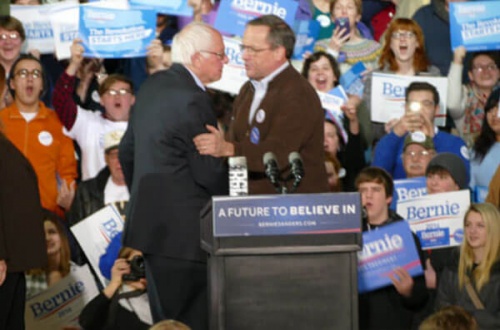 Vermont Senator and one-time Presidential hopeful Bernie Sanders announced in a rally held in Portsmouth, New Hampshire on Tuesday that he is backing Hillary Clinton's bid for president.

A number of Sanders' supporters have pledged that they will not transfer their support to Clinton.  But Sanders is urging his followers to reconsider so that Democrats can achieve their ultimate goal of defeating Republican presidential candidate Donald J. Trump.

"I intend to do everything I can to make certain [Clinton] will be the  next president of the United States," Sanders said on Tuesday.

"I am a big fan of Bernie but I will wholeheartedly support Clinton for president," Tapscott said. "It's the right thing to do, it's part of the political process as it's set up and currently works. It's not the lesser of two evils. Democrats should know the history of the party--supporting working class people and activism. I'm slightly disappointed it's not Bernie but I am thrilled they are working together."

Tapscott urged Sanders supporters who are on the fence about Clinton to remember the 2000 Presidential election between George W. Bush and Al Gore.

"If Gore had won, the world would likely look different now," Tapscott said. "But it came down to Florida, a place where Ralph Nader got 10 percent of the vote. I am really not trying to gamble with support of a third party candidate."

Despite preferring Sanders over Clinton, many Winneshiek County Democrats are planning to switch their support to Clinton.

"I'm very sorry to see him leave the race but glad that he has endorsed Clinton and united the Democratic party," Rockne said. "I'm especially happy that he has brought her to the left and has truly invigorated liberal thinking within the party."

Rockne also noted that Sanders supporters should not be dismayed as his success is a sign for the future of the Democrat party.

"The pursuit of liberty is a marathon not a sprint" Rockne said. "Bernie has done great things for this conversation, and I don't think he is going away any time soon. The best way to honor that accomplishment is to stay in it and support the party."