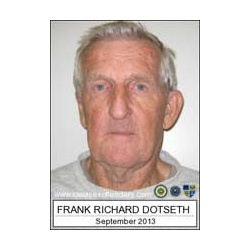 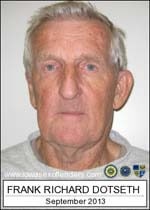 79-year-old Frank Dotseth, formerly of Decorah, has been released from prison--somewhat.

Dotseth was convicted in 2008 of five counts of third-degree sexual abuse.  He admitted to engaging in acts in 2006 with a then 13-year-old girl, but claimed the acts "were not sexual in nature."   Dotseth said he was an ordained minister of his own religion, "The Church of One."  He claimed his contact with the girl came pursuant to the practice of his religious beliefs.

The Iowa Court of Appeals disagreed and upheld the District Court's sentence of ten years in prison on each count--to be served concurrently.

After serving five years in prison, on September 6th Dotseth was ruled as having served his sentence.  But Iowa law states that people who have been convicted of crimes like Dotseth was convicted of committing will have imposed "special sentence parole supervision" for as long as they live.

That means Dotseth was released from prison, but not from the state prison system.  Instead, he was sent to a residential facility in Waterloo.  His name and picture were also posted to the Iowa Sex Offender Registry.

Dotseth will be kept at the residential facility and will meet with parole officers every three months.