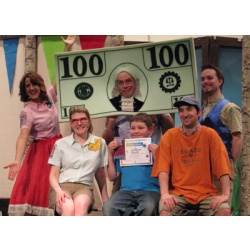 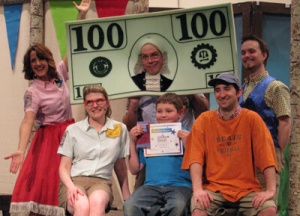 Thirteen North Winneshiek and Decorah school students were recently honored by the Old Creamery Theater for their prize-winning stories. One of those stories, The Hundred-Dollar Bill written by Jonathan Bolson, is featured in the troupe's traveling show, which is touring across Iowa this spring.

Bolson, a fifth grader at North Winneshiek, watched his story staged in the "Totally TeRRiFiCC" show, performed at Decorah High School on April 8 for area students. The annual Theatre for Young Audiences Tour is based on stories chosen through the company's annual writing contest for students in grades 1-6.

This year eight of the 19 stories chosen as the best in the state, were written by students from North Winneshiek and Decorah Schools. Following the show, these students were asked to come on stage to be honored with a certificate and gift card to Barnes and Noble bookstore.

Winners from North Winneshiek include: first prize ($75 gift certificate) to Meg Sessions for Panic at the Food Pantry; second place ($50) to Ruby Langholz for Secrets Spread Faster Than Dandelion Seeds, and Steven Sexton for The New Golden Egg; third place ($25) to Bolson; Amelia Dugger and Mairi Sessions for Diary of a Scared Kid; Aiden Arneson, Grace Hoyland, and Grace Stortz for Slow Saidy; and Caden Keck for Secrets Spread too Quickly.

Winners from Decorah include: third prize to Emma Brauer, Morgan Brauer, and Isabel Ihde for Mike and the Forgotten Pets.

The theme for the writing contest is the statewide Character Counts education program's Pillars of Character: trustworthiness, respect, responsibility, fairness, cooperation, and caring. School organizers for the contest are Carole Sand at North Winneshiek and Rhonda Thompson at Decorah.

Top photo: Old Creamery Theater actors performed The Hundred Dollar Bill, a story written by North Winneshiek fifth grader Jonathan Bolson, whose story was a winner in the troupe's annual writing contest. Bolson's was one of six winning stories chosen to be performed as part of the "Totally TeRRiFiCC" show. 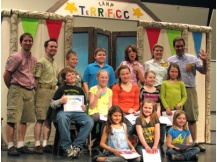 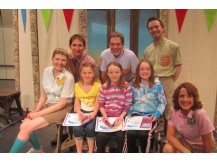