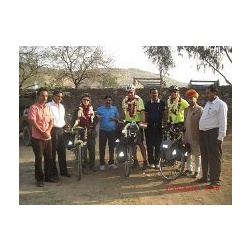 Freidhof and Budwegs at midpoint of India bike trip

Decorah residents Jeff Freidhof and Ward and Jacky Budweg are nearing the midway point of their 100 day bicycle trip around India.

It has been a warm trip, with riding temperatures reaching 120 degrees.  Says Jacky, "We frequently have to stop to get something cold to drink, get in the shade or have some good ole roadside watermelon."

The six weeks they have been in India have seen several adventures.  One day Jacky's bike had a flat tire and Jeff's pedal broke.   The flat got fixed but it took two hours to find a bike repair shop that could replace the pedal—even though they were in a city of 500,000.

During the fourth week in India, the three were coming into Bhiwandi when Jacky noticed all of the water tankers on the streets, which turned out to be police water cannons used for riot control.  The police made the three Americans return to the hotel because of the danger.

The Budwegs say the trucks in India are "overwhelming."   They say, "The number of them on the road, their load size and how they are decorated is quite a sight. It's like a traveling circus."

But on the other hand, the three have learned that the best food is at the truck stops. So they look for a busy truck stop and eat there for a reasonable price.

So far their trip has taken them to the Taj Mahal and to the Indian Ocean.  Their itinerary also will take them to the mountains of Nepal.

The Budwegs continue to write about their travels in their website, www.fromthebenchesoftheworld.com 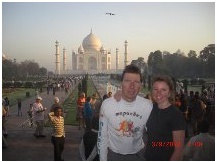 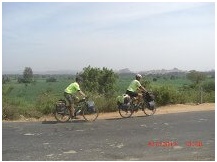 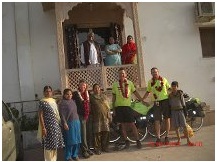