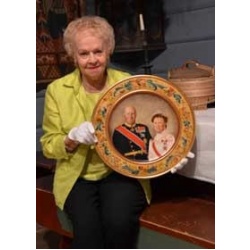 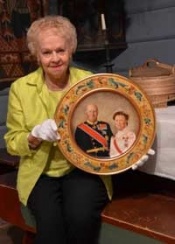 Norma Wangsness with the portrait plate she presented to the King and Queen of Norway (decorahnews.com archive photo)

In 2011, Wangsness was commissioned by the museum to create a plate in honor of Norway's King Harald V and Queen Sonja's most recent visit to Decorah. She painted a portrait of the Royal Couple and bordered it with rosemaling that matched the pattern of the Queen's bunad. Wangsness speaks of the opportunity to present the gift in person as, "one of the greatest honors and the highlight of my career."

For 25 years, Wangsness and her husband, Willis, operated Wangsness Photography Studio in Decorah, Iowa. Her husband took the photos and she hand-colored them. Wangsness became a regional and national leader in photographic arts standards and education, earning many awards for her work.