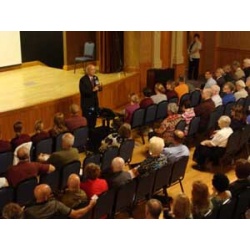 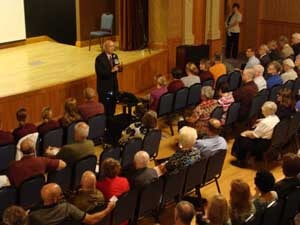 A crowd of 175 people attended a two-hour presentation Thursday night about health care in Winneshiek County.

Mayo Clinic Health Systems officials had scheduled the meeting to present their take on where health care is headed in general and in Winneshiek County in particular.

Decorah physician Dr. Brian Dougan gave a presentation tracing health care in Winneshiek County since 2001, when the hospital, Gundersen-Lutheran and the Decorah Clinic were all separate organizations.  Dougan told the audience that since that time Gundersen Lutheran has had a "competitive" relationship with Winneshiek Medical Center and said Gundersen had been "steering people away from the medical center."

Dougan said Gundersen has installed its own CT scanner and brings in a mobile MRI unit, actions that he claims have resulted in a loss of $1 million a year to the hospital.

Dougan also called the Gundersen Lutheran Health Plan "a dangerous product."  He said Gundersen could use the terms of the insurance policy as leverage against the hospital.

Gundersen Lutheran official Jerry Arndt was given a few minutes to speak at the end of the 90 minute presentation.  Arndt said "there's a lot more to it" than what could be told in five minutes and regretted that Gundersen had not been given more time to tell its side of the story.  Arndt noted Gundersen's collaborative arrangements with hospitals in other nearby communities and said "It's worked in other communities and it could work here."