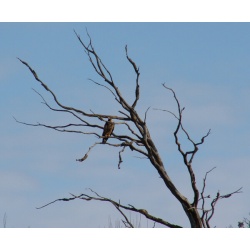 Bob Anderson of the Raptor Resource Project reports that D1 Eagle has been located, and he was able to get this picture on Wednesday. She was perched in a tree on the top of a hill  just to the north of the Yellow River.  Anderson attempted to attract D1 with a road kill squirrel, but she was cautious and flew away. But that is good news says Anderson, "I'm glad to see that she has developed a fear of people."