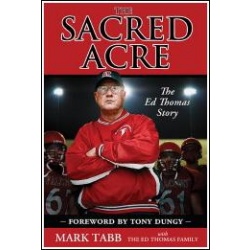 Life of former Aplington-Parkersburg football coach still affecting those in Decorah, in Iowa and throughout the country 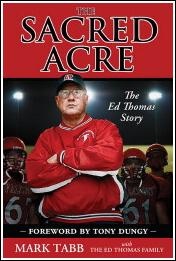 Parkersburg, Iowa is a town of just 1,800 people.  But the life of former Aplington-Parkersburg football coach Ed Thomas continues to affect lives throughout the country.

Thomas was shot several times by former student Mark Becker on June 24th, 2009, dying immediately.  It was more tough news for a community that was still recovering at that time from a massive tornado that destroyed half of the town.

Thomas' wife, Jan, and one of his sons, Todd, visited Decorah on Saturday to promote the book that describes those events--"The Sacred Acre."  Jan says she thinks the book, written by Mark Tabb, has resonated with so many people because "we are so ordinary."  Indeed, the themes of the book are everyday themes--faith, family, hard work and hardships.  But the reaction of the family and the community to the hardships was extraordinary.

When the F-5 tornado struck Parkersburg in May of 2008, killing eight people and destroying 250 homes and businesses, Ed Thomas called on the town to rebuild the high school football field in time for the first home game that fall.  Jan Thomas says it wasn't that Ed Thomas cared more about football than he did about the town--he saw rebuilding the football field as a way to persuade town residents to band together and rebuild the community.  The idea worked.  Little by little the town rebuilt.  "When the Kwik Star reopened, that was a milestone," says Jan.

But just as Parkersburg was recovering from the tornado, Ed Thomas was shot and killed.  And the Thomas family acted with grace towards the family of the shooter.  It was a tough job to act with forgiveness, says Todd Thomas.  "But if you hold that hatred, it comes to consume you," he said, noting "I'm still working on it."  Todd Thomas says it is tempting to hate Mark Becker, "but that's not the way I want to live."

On Saturday the two Thomases visited Dragonfly Books in Decorah, autographing copies of the book about their family.  While people throughout Iowa and the United States have helped Parkersburg and the Thomases, the two noted the tied between Decorah and Parkersburg, including AP High School principal David Meyer--a former Decorah teacher.