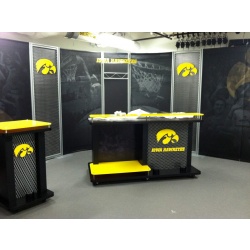 TOP STORY: Decorah's Dale McCormick gets a University of Iowa video studio named after him 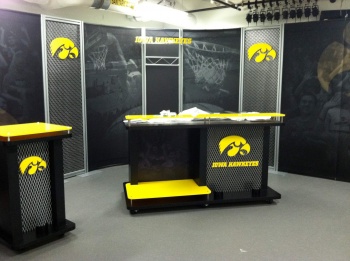 The next time you watch an interview program with one of the University of Iowa athletic coaches, such as Fran McCaffery, Kirk Ferentz or Lisa Bluder, the program will be coming to you from a studio named after a Decorah man.

Dale McCormick died recently after a long battle with colon cancer.  Two members of his extended family--Trisha and Darren Stortz of Decorah--work with the video production department for the University of Iowa Athletic Department.  They have helped produce broadcasts of sporting events as well as the coaches shows for the different sports.

So when McCormick's family started talking about doing something in honor of Dale, the thoughts turned to the University of Iowa Athletic Department.

University of Iowa Director of Video Productions Michael Moriarity says the students began taking donations in August.  On Sunday, the studio was officially dedicated as "The Dale McCormick Memorial Studio."

It was the first time the room was used for one of the coaches' interview shows--the "Fran McCaffery Show."  At the end of the show, McCaffery and host Gary Dolphin talked about Dale's family, friends and co-workers in Decorah and about the fund drive that led to the naming of the studio.

"The Fran McCaffrey Show" will air at 10:00 a.m.Wednesday on the Big Ten Network.