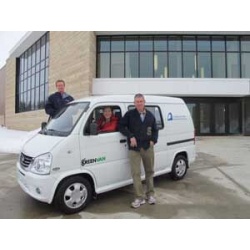 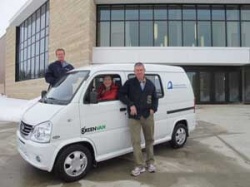 The van not only reduces the current NICC vehicle fleet's dependency on petroleum-based fuel, but also produces zero pollution during its daily operation.

NICC Calmar campus plant manager Tom Ward said that the ongoing schedule for charging up the van will take some getting used to, but the new van will make short trips for his staff much more efficient and cost-effective. "We will charge it up overnight, every night. On one daily charge, the van has a 30-35 mile range," said Ward. "It's a little narrower than a regular minivan, and it reaches a top speed of 25 miles per hour," he said.

The new vehicle is a Vantage EVC 1000 model manufactured by Cushman Motor Company in Minneapolis, Minnesota. It has two sliding doors on each side and a hatch in the back, similar to standard minivans.

His staff plans to make local trips to Calmar using the vehicle, such as to deliver and pick up packages at the UPS center or post office. NICC made some custom adjustments to the van, such as installing a back up alarm to alert pedestrians who may not hear the engine's quiet operation as it drives in reverse.

NICC purchased the vehicle for $20,950. In addition to an engine that produces no emissions, the EVC 1000 is powered by six rechargeable lithium batteries that provide power for 30,000 miles before needing replacement. The vehicle also holds up to five passengers and takes four to six hours of uninterrupted recharging to replenish the batteries after a full day of usage.