Two new members appointed to Luther College's Board of Regents 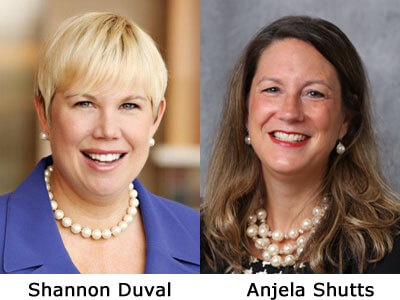 Luther College alumnae Shannon Duval and Anjela Shutts have been appointed to serve on the college's Board of Regents.

After graduating cum laude from Luther in 1995 with degrees in English and political science, Duval received a master's in higher education administration with a concentration in philanthropic studies from Indiana University, and pursued Ph.D. coursework in higher education administration from the University of Iowa. Duval also holds a Master of Jurisprudence in health law from Drake University Law School.  Duval was awarded Luther's Distinguished Service Award in 2015, recognizing her service to society and to Luther, and fidelity to the ideals of Luther. She twice has received the "40 Under 40" award in both the Des Moines Business Record and the Corridor Business Journal.  Duval and her husband, DeLane, reside in Castle Rock, Colorado, with their sons Miller and Kiefer.

Since graduating from Drake University Law School in 1996, Shutts has practiced law with Whitfield & Eddy law firm in Des Moines. She was awarded the Polk County Bar Association Award of Merit in 2017.  Her practice focuses on domestic relations and she is certified to mediate family law by the Iowa Supreme Court. She also practices in the area of collaborative law and divorce.  Shutts is married to Peter Kitundu. They have two daughters—Mary Elisabeth and Lillian.