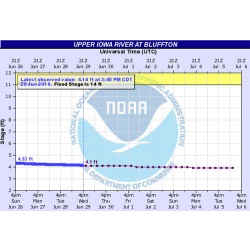 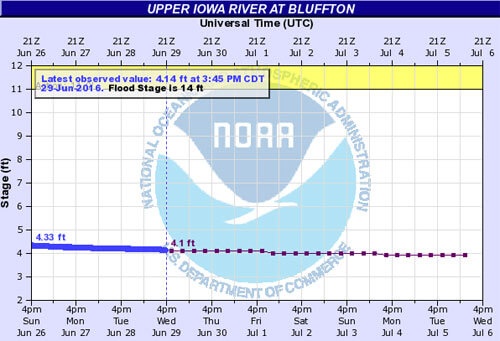 The National Weather Service La Crosse Office has begun making river stage predictions based on the data received from the gauge on the Upper Iowa River at Bluffton.

A river level gauge on the Upper Iowa River has been located just east of Bluffton since 1999.  But now the information from that gauge will be used to develop river level forecasts at that location, as well as just upstream of Bluffton itself, downstream a few miles to the confluence with Ten Mile Creek.

Data from the river gauge is transmitted via automated satellite links to NWS offices. River forecasts are then generated at the North Central River Forecast Center in Chanhassen, Minnesota, and, after coordination, are issued by the National Weather Service in La Crosse. These forecasts use past rainfall and predicted rainfall or snowmelt in the area, as well as temperatures and soil conditions, as input to a hydrologic model to predict changes in river levels. The forecasts will be issued on an as needed basis, when rainfall or snow melt is expected to cause river levels to rise significantly, and pose a possible threat.

As a result, there will be quicker forecasting of the risk of flooding in the Decorah area.

Flood stage for this Bluffton location will be 14 feet on the river gauge. The gauge equipment is owned and operated by the U.S. Geological Survey (USGS), Water Science Center in Iowa City.

Data and forecasts for the Upper Iowa River and other rivers around the area can be viewed at http://www.weather.gov/arx under the "River Info/AHPS" tab. 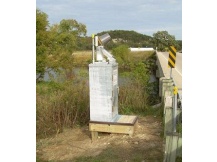 The river gauge near Bluffton 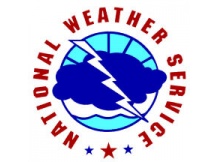