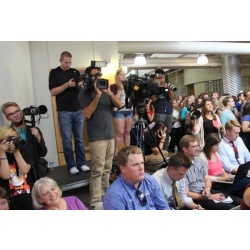 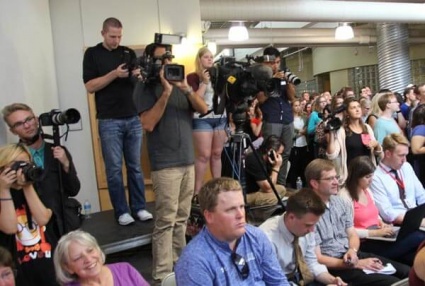 When George H.W. Bush was running for president way back in 1988, he made a campaign speech in Decorah, at what was then called "The Cliff House."  Bush was Ronald Reagan's Vice President at the time, so the White House reserved all but one room of the Cliff House for the staffers and campaign aides and Secret Service agents who had to follow the Vice President.

As it turned out, the one room at The Cliff House not reserved by the White House was used by Illinois U.S. Senator Paul Simon--who was also running for the Presidency, although less successfully, on the Democratic Party side.  I remember thinking at the time, "Boy, things sure do change once you get into the White House."

Which brings me to Hillary Clinton's visit to Decorah on Monday, which was much more like George H.W. Bush's and not at all like U.S. Senator Paul Simon's.  There were staffers and campaign aides and Secret Service agents and you had to go through metal detector screenings in order to get into the building.  Clinton gave a very polished speech, then flawlessly answered questions from the audience about a number of topics.

This is a presidential campaign in which Washington D.C. outsiders are doing much better than insiders in attracting the public's support.  We need someone running the country who has experience and knows just how demanding a job that is.  But with Jeb Bush's support sinking into single digits and with Hillary Clinton now passed by Bernie Sanders in popularity in Iowa, will voters come around to that way of thinking by November of 2016?  Stay tuned!