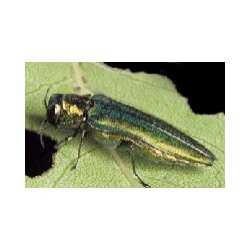 29 Iowa counties have had confirmed cases of Emerald Ash Borer infestation, following news of two discoveries in Dubuque County.  That means 28 of Iowa's 99 counties have now been confirmed positive--although Winneshiek County remains off the list.

In addition to the southern Dubuque detection, a tree in a rural area just outside south Dubuque city limits was also detected. Both sites were declared positive after the collection of EAB larvae.

"Iowa now has seven counties bordering the Mississippi River that have turned up positive for EAB," said Mike Kintner, Iowa Department of Agriculture and Land Stewardship EAB and gypsy moth coordinator. "Unfortunate as it is, I wouldn't be surprised to see the remaining three counties declared positive within a year."