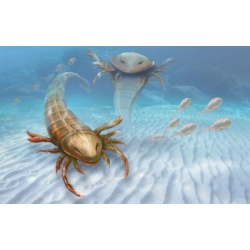 Scientists name a sea scorpion that lived 450 million years ago after Decorah--because that's where it was found. 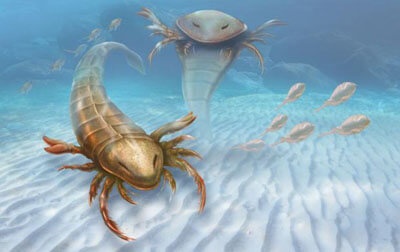 You're probably not a regular reader of the journal "BMC Evolutionary Biology," but you might want to take a look at the latest issue.

That's because a research team led by James Lamsdell of Yale University, looked at more than 150 fossil fragments found in the Decorah area and have now described their findings in "BMC Evolutionary Biology."

Lamsdell and other researchers have named the newly discovered creature "Pentecopterus decorahenis" because the fossils were found near Decorah.

The researches say Pentecopterus lived about 450 million years ago and, unlike the other eurypterids of that time, which were relatively small, "Pentecopterus decorahenis" was a giant that could grow up to 6 feet long.  It also had massive spines on its front limbs that it probably used to catch prey.

For more information about the fossil, visit Newsweek at : http://www.newsweek.com/scientists-find-worlds-oldest-sea-scorpion-fossil-367443 or the Los Angeles Times at: http://www.latimes.com/science/sciencenow/la-sci-sea-scorpion-20150831-story.html