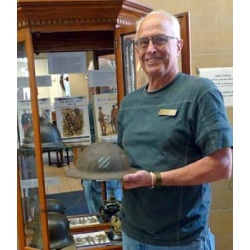 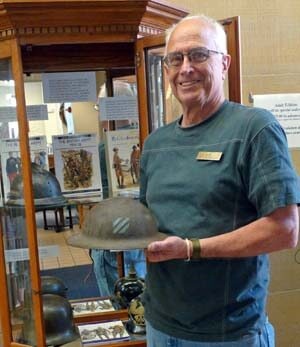 To commemorate the 100th anniversary of the beginning of the First World War, Decorah Public Library Assistant Jon Romelton has created a display of World War I helmets and reference books from his personal collection in the glass case near the library's front desk.

On July 28, 1914, war was declared on Serbia by Austria-Hungary after the assassination of Austrian Archduke Franz Ferdinand and his wife in Sarajevo, Bosnia by Serbian nationalist Gavrilo Princip.  Due to the complicated system of alliances at that time, the conflict quickly grew into what became a world war, involving nearly every country in Europe and several countries beyond the European continent.

During the nearly four and a half years that the war lasted, it became regarded as the first modern war. It saw the first widespread use of weapons such as the airplane, submarine, machine gun, tank, and chemical weapons.